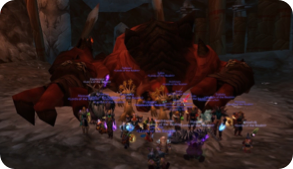 Our raid leaders have enough on their plates with both official raids and real life issues. Therefore, members are heartily encouraged to use the calendar for their own raids/heroics/leveling runs. Members may use whatever rules they feel appropriate. Please do not schedule during official Guild raid times.

Raids and some heroic instances are posted on the in-game calendar. The time listed is when raid formation begins. The description of the raid on the in-game calendar will indicate when pulls are scheduled to start, and describe what method of selection will be used (raid leader choice, or roll-off for spots). Members are expected to be at the instance and ready to go 15 minutes before raid time. If they are not present 15 minutes before pulls are scheduled to begin, their spot may be filled by a PUG.

Slot priority for all raids will be determined by one of two methods: Raid Leader Choice or Roll-Off. When a raid is posted on the in-game calender, the raid leader will state which method will be used. Note: The raid leader may choose to do a roll-off anyway.

Should we have more sign-ups than spots available, those sign-ups who showed up on-time and did not get into the raid will have priority spots on the next raid for that instance, provided they sign up for the next raid. If they do not show up for the next raid, they lose their priority spot. The raid leader should post on the forums noting who didn't get in the previous raid. Note: Raid Leader Choice raids overrides this priority, as the Raid Leader can pick and choose who will go on that night's raid.

So, to clarify, the unless raid leader choice is used, the priority order for raids is as follows:

Should all spots be filled by (1) and (2), then people who meet category (3) are excluded from the raid and do not get rollout priority for the next raid.

Any slots remaining after sign-ups are placed will be known as "pick up" slots. First priority will go to guild members and/or allies who have shown up for the raid but not signed up. Should more members be present than spots available, they shall roll off for the remaining slots as we have done in the past.

Should a raid still need members, friend/alliance channels shall be asked, with /LFG used as a last resort. Pick-up characters will have the same loot rights as a main.

Sign-ups who do not show up 15 minutes before pulls are scheduled to begin, or without advance warning they will be late, will forfeit their slot to the next available sign-up, or to a pick-up.

These characters must be ranked Yellow for the latest content by wow-heroes.com and/or perform adequately in progression content as judged by the raid leaders. If a character is ranked red for said content, but has performed well above par for their gear, they may be granted Raider status .

If a member wishes to change a primary character, the new raiding character will be subject to a 2-week period where they may not roll primary use on any item (however they may roll as off-use). The 2-week rule also applies if a character changes their talent specialization such that it changes their role within a raid (druid going from Resto to Boomkin, Paladin going from Protection to Retribution, etc.). The 2-week period is defined as two weeks worth of raiding on the character. If the character raids one week, then takes two weeks off with no raiding, they still have to raid one more week in order to be cleared for open rolls.

We require the following in order to participate in our raids:

If a player shows up without these, they may be left out of the raid.

Players are also asked to show up with all the requisite gear sets, elixirs, potions, oils, item enhancements, reagents, etc. they will use on the raid. A well prepared player is the key to raid success. A poorly prepared player hurts the entire raid.

All raids run with Master Looter on set at Rare (blue) level. Items are rolled on with primary use given priority. All players who would use the item may roll, with those who would use in a secondary fashion (e.g. holy priests rolling on damage gear, tanks rolling on dps gear) stating "secondary" or "off use" in raid chat immediately after their roll. Armor class is considered on primary rolls.

We operate on a "one main-use epic per night" policy, however that policy may be overridden if nobody else rolls on that item at that priority level (primary/secondary). Also, a list is kept of the winners during the run. Should people already have epics and desire another, they should roll anyway. We will go down the list and award to the person with the highest roll and has won the fewest epics. Example:


An item drops that Bob, Sid, and Nancy all want. Bob and Nancy have won 2 epics and Sid has won 1 epic that night. The rolls are as follows:
Bob rolls 83
Sid rolls 32
Nancy rolls 41

Looking down the list, Bob and Nancy have 2 epics, so Sid is given the epic to bring his count up to 2 epics for the night.

When attending raids, there are certain priorities. Real Life comes before Game Life, however you can provide the raid with courtesies if you must leave temporarily or permanently. Notify the raid. Most importantly, notify the Raid Leader. Raid Leaders have many things they are paying attention to. So, for this and any other important message, send them in a Whisper. Because Whispers appear in a different color, Raid Leaders pay more attention to them. If you have to leave permanently, any heads up is good. Whispers should also be used for any information you think would be good for a boss while getting prepared for said boss.

Ventrilo is a tool to have fun and make raids more enjoyable. This falls into two categories. On the one hand, it makes it easy to chat, joke, and have fun vocally with one another. However, it can easily become overloaded. Be courteous when using Team Speak. Whenever a Raid Leader speaks up during a pull for attention or is in the process of preparing for a boss, Team Speak needs to be cleared. While a boss fight is in progress, Team Speak needs to be left for those who are needed or emergencies. At the conclusion of a fight, do NOT yell on Team Speak. It is a tool to be used, and enjoyed, by all.

Come prepared. Come with reagents and ammunition that are required by your class. Have bag space so you can pick up required items, loot, or accept potions and related items. Come with any potions, elixirs, or consumables that you require to raid competitively. Come with the mindset and time to raid. We do not penalize for partial raids, but it can put your friends and guildies in a difficult position as they have to fill spots. Come with the time needed and with the mindset to get things accomplished as well as wipe. Getting new content requires preparation and commitment. Finally, read ahead. Go to http://www.wowwiki.com and other similar sites to read up on the next bosses you are likely to see. We will endeavor to provide tips on the Raiding Forum, if not, please link any relevant information that would help the guild. Even if you have not fought them, being able to say that you know why you goofed the first time around is invaluable.

Raid Leader is Final Authority During the Raid

The Raid Leader reserves the right to remove a character from the raid should that character not be performing up to par for the encounter. While this sounds harsh, it is only for the good of the other members of the raid. Devotion is a casual guild, so everyone's time is precious. Should a warlock not come with soul shards, or a hunter repeatedly lets their pet run wild and wipe the group, the Raid Leader may kick them from the raid.

The Raid Leader also reserves the right to override the results of a loot roll should the winning roll result in an item with no significant beneficial value to the winner (e.g. armor with agi/int/AP being rolled on by a DPS warrior).

If there are issues regarding a Raid Leader's performance or decisions, they should be brought up with an officer after the raid is complete.